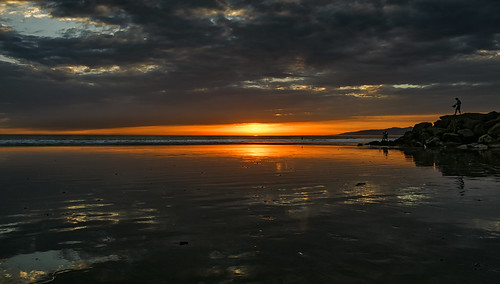 I realized over the summer when it was day after day of cloudless blue skies that there’s really nothing interesting about it to me. I guess it’s just hard for me to see something beautiful with such a distraction above. Instead of being the star or even a complimentary piece in the frame, the sky ends up being a void and it puts a lot more importance on the foreground. At least that’s how I see it. I simply can’t imagine too many scenarios where a cloudy sky would ruin the photo, even if I’m shooting a famous landmark or landscape.

During my long, 4,000 mile drive here back in mid december, the weather was pretty terrible. It was completely overcast or cloudy everyday (which was obviously a huge bonus) but steady winds in the 30-45mph range for days and freezing temperatures made things really difficult. In my head, I just kept trying to be thankful I had amazingly dramatic skies the entire time. I almost skipped the Petrified Forest in Arizona because of the cold and wind which would’ve been an enormous mistake since the clouds moving quickly over the land one of the most memorable things I’ve witnessed. Still, I imagine i would’ve been less enthusiastic about the visit there if the skies were blue and empty.

I went out intermittently over the summer months, usually only when the forecast suggested at least a few clouds. It was really hot and to drive an hour for a hazy sky just seemed like a waste. A few times when the clouds vanished before I arrived, I at least tried to salvage the trips with some daytime work with the 10 stop ND filter. I even hiked a few miles in 100 degree heat with all my gear hoping a waterfall would hold…water. it did not. The months away from shooting allowed me to go through my archives which I always love doing and work on my post, but it’s hard to turn off the desire to shoot for a long period of time. When the weather began to cool off more and it seemed like Fall was close, the forecast finally called for a few days of cloudy skies at all the locations I’ve gotten used to here in Southern California. I chose Venice for that first real cloudy day and it was perfect. Great weather, the closest legal FREE parking space to where I go and a large colorful and cloudy sunset. Venice is really my absolute favorite place to shoot with a cloudy sky for a variety of reasons and the great night Monday brought me back the following night.

This was not too long after arriving and the very overcast sky made it get darker a bit faster than I had hoped. I spent the majority of the shoot trying to get panoramas lined up and people wandering through the very wet and shiny reflective shoreline while the sun set. The yellow-orange hue shifted with the setting sun to an orange-red and with it, the blue-gray sky shifted to a grayish purple. I can’t say I moved more than 15ft in any direction that evening either. I had the sunset in this direction, the reflections of the homes along the boardwalk behind me and to the left, the pier and the planes flying above. I didn’t see anyone the last hour I was there except for 2 weirdos who thought I was Jeff…their drone pilot. I don’t think Jeff every showed up. Bummer.