B.A.P. Unión – Peruvian Tallship – One of the largest sailing vessels in the world 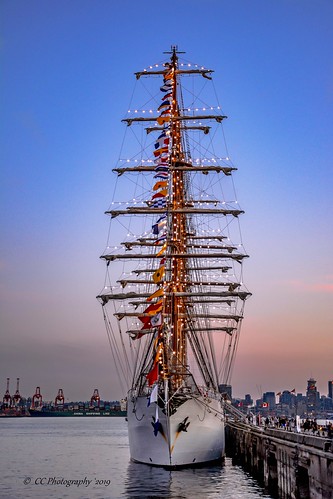 Please see previous image for a side by side, day and evening comparison.

It was an amazing experience to view and witness this absolutely gorgeous sailing vessel, that was moored this weekend at the Burrard Dock Pier, North Vancouver, BC Canada

It is my absolute pleasure to be able to feature this incredible Tall Ship from various angles, and under the changing evening light.
I was in my glory having the opportunity to photograph this fabulous vessel.
I hope you enjoy viewing this ship as much as I enjoyed capturing it.
I even had the honour and privilege to tour onboard this Navy Ship. 🙂
Please stay tuned for many images to follow.

The B.A.P. Unión, a Peruvian ship, arrived To Vancouver, BC Canada, Thursday to commemorate 75 years of diplomatic relations between Canada and Peru.

The tall ship — a traditional sailing vessel — serves as a training ship for Peruvian naval cadets. That country’s government says it is the second largest training ship in the world.

Like other similar ships, Unión has been conceived not only for training purposes, but also to be a sailing ambassador for its home country. Due to its features and dimensions, it has been considered (as of the date it was commissioned) the largest sail vessel in Latin America. Wikipedia

Additional info.
For a long time, the Peruvian Navy desired a training ship for instruction of its cadets. Accordingly, the Peruvian government enacted 1985 Law N° 24094, which declared as a public necessity the navy having this kind of ship. However, due to the economic crisis of debt and hyper-inflation Peru suffered at the end of the 1980s, and later for public spending restraints, the project was postponed.
Eventually, in 2010 the project was approved and the construction was authorized. In 2012 the Peruvian government announced its decision to order the ship’s construction to the Shipyard Marine Industrial Services of Peru, known as SIMA; in cooperation with the Government of Spain, through the contractors Cypsa Ingenieros Navales and Navantia, which were responsible for the ship´s structural design. The governmente named the ship as Union to honors a Peruvian corvette that took part in the first stage of the 1879–1883 War of the Pacific as part of a naval squadron under the command of Miguel Grau, a hero of the Peruvian Navy. On December 8, 2012 Unión’s construction began with a keel laying ceremony in the presence of Peruvian president Ollanta Humala. The hull was finished two years later and the ship was launched on December 22, 2014.
In June 2015, the ship received its masts and propeller; and the interior fitout began in charge of contractors Acopafi and MO Contract. Also, according to an agreement between SIMA and Navantia, the ship was provided with an "Integrated Control System Platform, Navigation and Communications".
While the ship was under construction, the Peruvian government arranged training for the future Unión’s crew with the help of an instructor from the Spanish Navy and by sending personnel to serve on training ships of other countries, such as the Mexican sailing ship ARM Cuauhtémoc. Also, a Peruvian delegation was sent to take part in maintenance and repair works on Colombian sailing ship ARC Gloria. Wikipedia

Each and every view, comment and fave are so very much appreciated. Thanks for visiting…….