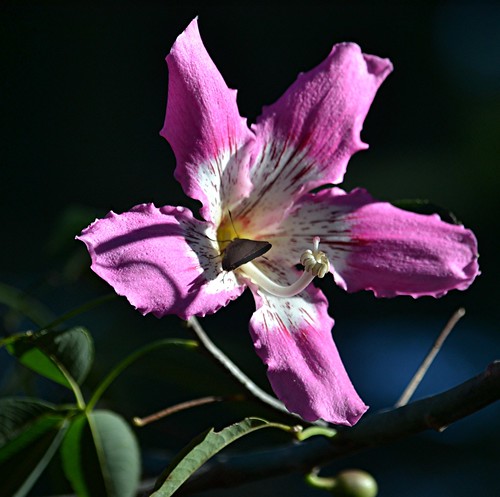 Pink Ceiba, the flowers of the world’s fastest growing tree. The inside of its trunk is so soft that it has 4 inch spikes to protect it from predators… giving it its nickname, Monkey Tree, because a agile monkey can climb it!

The Ceiba tree figures an important part in the mythologies of pre-Columbian Mesoamerican cultures. Several Amazonian tribes of eastern Peru believe deities live in Ceiba tree species throughout the jungle. The Maya civilization believed that Yaaxché, often depicted as a Ceiba trunk, connects the planes of the Underworld (Xibalba), the terrestrial realm and the skies. Unmistakable clusters of thick conical thorns on the Ceiba trunk were reproduced during the Classical Period on ceramic burial urns and incense holders by the southern lowland Maya.

Modern Maya still respectfully leave the tree standing when harvesting forest timber. The Ceiba tree is represented by a cross and serves as an important architectural motif in the Temple of the Cross Complex at Palenque.

Ceiba pentandra produces a light and strong fiber (kapok) used throughout history to fill life preservers, mattresses, pillows, tapestries, and dolls. Kapok has recently been replaced in commercial use by synthetic fibers. The oils of Ceiba seeds are extracted to make soap and fertilizers. The Ceiba continues to be commercialized in Asia especially in Java, Malaysia, Indonesia, the Philippines.

This tiny Florida Skipper is in a perfect power position, pointing to the very sharp… I know all too well… black point of the Century Agave. The spider web completes the third side of this triangle magically.

Despite its appearance and what most of my books say, it seems a Skipper is a butterfly, not a moth. Common Skippers (Hesperiidae) are distinguished from the higher butterflies by their large moth-like bodies, small wings and hooked antennae. Skippers have amazingly large and focused eyes and their bodies look like they’re covered with a fine brown dust.