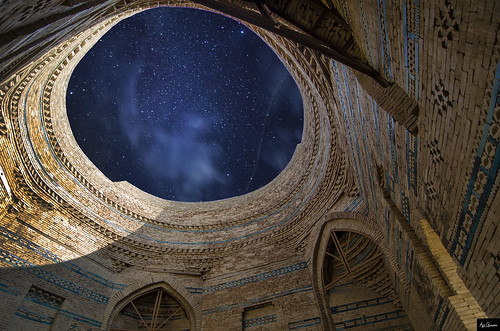 Few years ago I heard about some pre-historic era tombs near Dera Ismail khan. When I first saw the picture of these edifices; I was totally spell bound. The only question revolving in my mind was that why this marvelous architecture didn’t gain much attention? I wished to visit this place but was unable to find the exact location of it.
Finally I found the place and its direction from Google earth so I decided to visit this place. On 23rd December, I along with a friend left for Dera Ismail khan from Lahore, It was one of the most tiring travels of my lifetime. We failed to get tickets for DIK because of two connective holidays of 24th and 25th December. As a last resort we had option of Balouch Transport; one of the oldest buses on roads of Pakistan. It was fully packed with passengers and even the middle walking corridor was jammed with temporary seats. Neither could I move my legs nor could stand on feet’s because of congested space. But despite of my deplorable condition; travelling in public transport helps you to interact with peoples of all colors & help you acquire lots of information. Adding to my misery; the busses started race; it was fun for some but a fearful experience for soft hearted person like me.
We reached Dera Ismail khan before dawn on 24th December. It was a shivering cold morning. Our friend Karim lives there was our host. He arranged bikes for our further travel. Unfortunately the whole city was closed due to holiday. So it took us some time to start our journey on Indus highway. Our next destination was Mahra. This small village situated at some 40 kilometers south of DIK on Indus highway. Further 1.2 kilometers from village will lead to a roadside sign pointing to take right turn for “Ancient Tombs and Graveyard”. It was a seven kilometer long village road and was full of dirt. A watercourse was running parallel to the road. There one can find Temporary houses of IDP’s (Internally displaced persons) of FATA.
It’s not safe to travel alone on this road. One should take some local along or travel in group. After road there is clump of trees on left. From a distance one can see domes of prehistoric tombs. Once we moved inside that clump of trees. We got first full sight. It was amazing four tombs and graveyard; exactly as I saw them in pictures. I was standing among them. This sight gave me a feeling of inner satisfaction; a feeling which cannot be expressed in words. It was an expression of gratitude to great architectures of that era. Locals called this place “Andiray” which means ‘graveyard’ in the local dialect of Pashto. I started asking questions from myself that who could be buried inside those tombs? Whose graves are these? These all are still unanswered questions. Only Dr. Ahmed Hassan Dani has done some authentic research on this place. Dr. Dani was a Pakistani intellectual, archaeologist, historian and a linguistic. In one of his books; “Pakistan through ages”; he points out that this site must have acquired an important geographical position during the travel of Ghaznvids Sultans to Sindh and Punjab.
Khyber Pakhtunkhwa was part of larger Islamic empires from 963 to 1187, including the Ghaznavid Empire (975-1187) headed by Sultan Mahmud of Ghazni. Mahmud is said to have made seventeen raids into India. At that time, North India was divided into a number of Hindu states. On the frontier of India, there existed the Hindu Shahi kingdom which extended from the Punjab to Kabul.
Lal Mahara, site is an important Islamic Architecture site dated back to 11th and 12th centuries A D. The site consists on eleven monumental tombs and more than 120 graves. But only four tombs and some graves in dilapidated condition were surviving at the time of protection while the rest seven tombs were completely razed to ground only their traces are visible. The rest four tombs have been preserved and restored only. Presently the site is well preserved and free from encroachment. Tree plantation as a barrier against weather affects as well as to restrict fresh burial (modern and ancient graveyard) has been provided. However keeping in view gradual development activities i.e. housing and agricultural in close vicinity it is necessary to take necessary measures to safe guard the site from any encroachment as well as bad effect of excessive irrigation resulting water logging in future. Features: Architectural features of these tombs are worth to mention. In these corner turrets have provided to tomb 1 and tomb 2 are square in plan. While the other two are without corner turrets and square in shape. Here cut and dressed brick work have applied while blue color tiles have utilized for decoration purposes. Furthermore, all the square chambers have converted into octagons by producing squenches. Deptt of Archaeology conducted conservation work in a large scale and preserved all these four tombs while domes are missing.

Remarks: This graveyard site is well preserved site. From southern side iron grill has provided while to all four sides plantation further strengthened its boundaries. Moreover a local chowkidar (Gulu) is performing his duty on the site.
Someone needs to pick up where Dr. Dani has left otherwise his work and legacy will be lost. We are yet to discover much more than we have already, but archeology is not attractive as being Doctor or Engineer