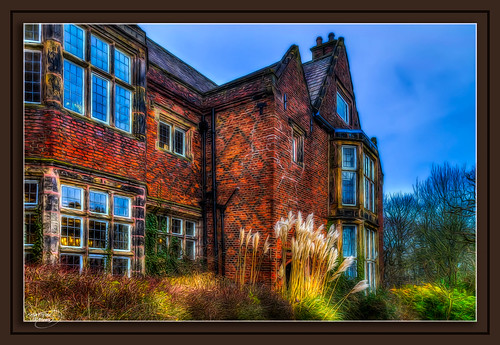 I love history and old buildings and this one was built in 1545! There are 18 photo’s in this collection, I hope they don’t bore you……….

The house as great history which you can read below… The really sad thing about this amazing house is that it’s now a Antique shop. Everything you see in my pictures as a price on it. The chairs, the mirrors, just everything, What a sad end to a brilliant history of this house. So as you look through the pictures, keep in mind that everything you see as a For Sale price on it……………….

Heskin Hall is a manor house in Heskin, Lancashire, England. Construction began on the present hall in 1545 making it a Tudor building which has been designated a Grade I listed building by Historic England.

In 1506 the lands were sold to Edmund Dudley who was Minister for king Henry VII. Dudley was executed by the king for treason and the land passed to his widow Elizabeth who later married Arthur Plantagenet. The land passed to John Dudley, 1st Duke of Northumberland in 1511, who was later executed by Queen Mary and Elizabeth I executed his son Robert Dudley, 1st Earl of Leicester. In 1556 the estate was bought by Richard Molyneux who also bought lands from Mary Seymour, the widow of Thomas Seymour who was the father of Jane Seymour (wife of Henry the VIII).[Following the death of Richard in 1568 the estate passed to his son William Molyneux. The house remained the home of the Molyneux family until 1739 when it became a seat of the Mawdesley family, but was sold in 1744 to Alexander Kershaw. Alexander Kershaw never married and died in 1788, his will acknowledged three children, Edmund Newman Kershaw, John Copper and James Kershaw.

Edmund being the eldest child inherited his father’s estate which later passed to his brother John Copper when he died. John died in 1833 like his brother, without any children causing a legal dispute. It was the heirs of Mary Scott (née Kershaw) who was sister of Alexander Kershaw that won the legal title of legitimate heir. In 1885, it was purchased by Henry Rawcliffe of Gillibrand Hall.

Lord Lilford was the last person to occupy the house with Lady Lilford (his fourth wife) who was an ex-dancer and actress. They divorced in 1969 and Lady Lilford gained the Heskin Estate as part of the divorce settlement.

It was later occupied by Blackburn College as a training centre, followed by Moben Kitchens as offices and sales training purposes, before its present use as an antique centre which opened in 1995.

Probably the most talked about inhabitants of the Hall are the ghosts. There were three documented but one left, it is said, with his piece of furniture many years ago. The two remaining are the a young girl and an older man that are said to date from the Civil War. The Hall and much of the surrounding County was a centre for much activity with several battles and skirmishes fought nearby. Indeed the County saw many atrocities and fighting here was amongst the fiercest in the Country.

The Hall was allegedly an overnight stopping place for Oliver Cromwell as well as being a site for the hanging of religious martyrs. Certainly the then owner, John Molyneux, is known to have declared for Parliament but only after the fall of Lathom House (a Royalist stronghold) and he had to compound for the estate.

As to the ghosts themselves they are said to be the those of a youg Roman Catholic girl named Mathilda who was hanged by a Priest found at the Hall by Cromwells’ soldiers, as evidence of his conversion to Protestantism. Cromwells’ soldiers were unconvinced and hung him from the same spot.