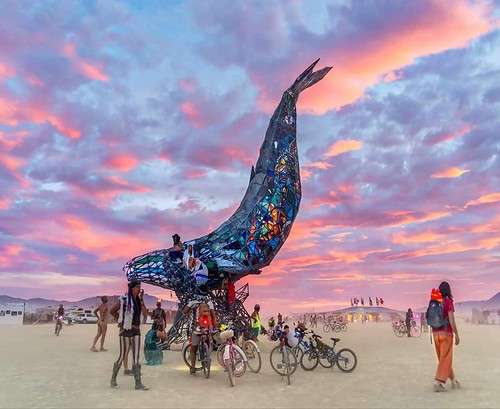 The Artist Admires His Work That’s the great Matthew Schultz there on the right (with the neon juggling pins), walking past his amazing Space Whale. Their team (The Pier Group) does some of the most amazing work on the playa. You may remember the two giant heads (Embrace) from a few years ago and the pier to the pirate ship several years ago. I visited my friend many times, especially at night as whale songs cooed between physics lectures; the scene was mesmerizing and otherworldly! And no, this isn’t the last photo of the Space Whale you’ll see! As I was driving away after the burn, I went back past it as the team meticulously deconstructed the whale. Each of the intricate pieces of stained glass were carefully removed to wrap individually in canvas so they wouldn’t break. It occurred to me that so much of the "art" is not so much as the final work as much as the dance of building it and taking it back down out of the white desert. #BurningMan#spacewhale#thepiergroup#industwetrust#treyratcliff#burninan2016 via Trey Ratcliff on FB at ift.tt/1v05hWZ Snapchat: treyratcliff ift.tt/1qx3iMJ Instagram: treyratcliff ift.tt/1c7s6Uy