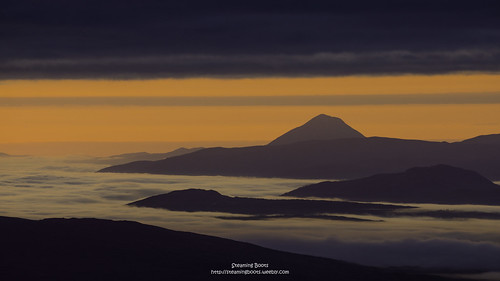 I was knackered… Another long week and being held up at 11pm in bridge traffic meant a 1am finish on the Thursday night – could I really be bothered heading for a wild camp about a 2hour drive away on a Friday evening? Maybe just relax, crack open a beer and watch the footy?
The good forecast saw me dump the beer and footy idea and I was soon on a familiar road headed for Glencoe. “90% chance of cloud free summits” one forecast read, with others along a similar vein. Pulling up at the car park under Stob Coire Raineach, I questioned my sanity. Cloud filled the sky as I watched the que of traffic coming off the hill. However, I eventually sorted myself out and was soon ascending the path to the bealach on Buachaille Etive Beag. Last time I had visited it was snowy and blowing a hooly! This time the wind was lighter and the ground was green and not white. Physically I was feeling strong, mentally – I was exhausted….

I sat at the twin cairn gaping at the cracking view to the big Buachille and eventually dragged myself up to start the final ascent to the summit of Stob Coire Raineach. I had planned on another camp on Chrulaiste – however I guessed it would be busy with the forecast and the weekend looming. I was hoping for a quiet time up here 
The ascent is a little rocky in places from the bealach, but I was soon on the top taking in the views. At first glance I thought I would easily find a pitch with numerous grassy spots, however finding a place with grass and no rocks proved impossible. Eventually I succumbed and relied on the air ground sheet to do its best. Had I had my old rolly up ground matt, I’d have been in trouble 😉
Tent up, tea on and sunset was approaching. That wasn’t the only thing approaching – cloud was hugging the summits now and any thoughts of a spectacular sunset were dashed! 20.45 and I headed to bed- knackered!
Usually I sleep poorly on wild camps but tonight I slept soundly…. Until 03.49 am! I wasn’t sure if I was still dreaming but the whoosh, whoosh, whoosh of propellers and engine noise was growing to the point that I eventually literally jumped out of the tent thinking the helicopter was about to join me inside. The cloud hadn’t cleared and the helicopter passed up the glen with it spot light illuminating a huge triangle of space. This wasn’t good, I hope all involved are safe and well. Watching in the darkness from the summit I could see the rescue operation unfold for the next hour somewhere in the darkness towards the top of Beinn Fhada. Once again it shows the bravery and dedication these heros go through to help someone likely to be a stranger.
I headed back to bed hoping that all involved were ok.
Sunrise was due at 06.15, so I set the alarm for 5.15, but for the first time, I slept right through it!! I woke with about 10 minutes to spare. At first glance it was still cloudy and I contemplated going back to sleep. However I thought I better check the eastern horizon – just in case! I was glad I did because the sunrise was spectacular… In a frenzied 10 minute spell, I fumbled with lenses and tripod’s and got the camera set up just in time to watch the sun illuminate the clouds and then rise over the banks of fog that covered Rannoch Moor – an amazing sight! It was over just as quickly as it arrived and I was soon checking my weather app. Blues skies forecast – mmmmmm – Not here, not now and in fact the low cloud rolled in reducing visibility to zero – time to head off… I descended quickly into the gloom and was back at the car for about 09.30.