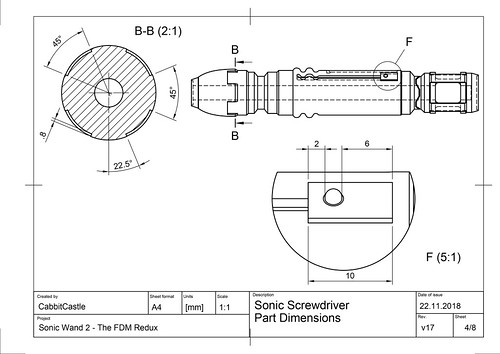 NOTE:
You can get all of the instructions and details over at my instructable which I have published on this very thing:
www.instructables.com/id/Sonic-Screwdriver-Wand-2-the-FDM…

BACKGROUND:
‘Twas the year 2014 when a friend of mine asked me to make her something similar to the Sonic Screwdriver Wand made by expert wandmaker Maranda Li aka Praeclarus Wands. The result of that inquiry was my own take on this, which I have documented in its own instructable (www.instructables.com/id/Sonic-Screwdriver-Wand-Doctor-Wh…). I even made a nice Tardis / Ollivander hybrid box for it to be kept in and again, made an instructable for that (www.instructables.com/id/TARDIS-inspired-Fitted-Wand-Box/). Going further out of my way I designed a huge, A1 blueprint-like poster for the wand which you can grab for free and print for non-commercial purposes if you feel like it (www.flickr.com/photos/cabbitcastle/14480701121/in/album-7…, or on instructables). Print it, slap it onto your wall, make your own T-Shirt with it, as long as you don’t make any money off it and maybe, just maybe send me a picture of it I’m cool with it.

It was supposed to be a one-off project, yet time and time again I had been asked if there was a possibility to make another one. It seems access to woodworking lathes is rather limited, which in hindsight should come as no surprise. I mean if you don’t have a lathe yourself, how do you even find someone who does? Plus, using one isn’t that straightforward either. Until recently one determined lass managed to bribe, I mean convince me to bring this project back to life. The catch this time is now that I have my very own 3D printer I’ll be allowed to make the whole thing 3D printable, though mixed media or complete wood reconstruction is, of course, still possible for anyone who wants to do so. I think that access to 3D printers or 3D printing services ought to be far better than the woodworking lathe supply, so I might actually lay this to rest for good this time.

PROJECT DESIGN:
Generally speaking, when recreating a prop or using it as an inspiration, getting as much high-quality reference material on it as possible is a tremendous help. As I am mostly copying myself / the previous iteration of this project and as I am a data hoarder I still have all the necessary material safely stored on a hard drive. Additionally I have procured some rather decent pictures from a production-used Sonic Screwdriver from Doctor Who episode “The Day of the Doctor” thanks to a tbt Props sale as well as from a high-quality replica by The Celestial Toystore.

Now it was never the intention to make a perfect replica, so my design is still not that accurate in respect to the original prop. I actually know for a fact that there are mistakes. It is, however, more detailed than my previous version with most differences being in the details. The general design can be seen in the sketches I have attached as a PDF here.

I have taken steps to have the wand and grip part seperate (as was done previously) and joined by an 220mm long, 8mm diameter steel rod to give a higher weight to the Sonic Wand, making it feel higher-class than it actually is. As I realise not everyone will want to go down that route I have taken the liberty to design a couple different versions for various types of printing / manufacturing / joining. You can find them going over the instructable link at the top.