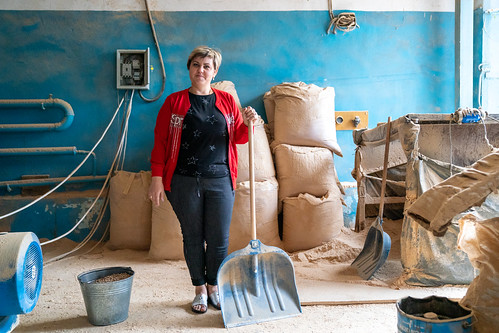 Oksana produces wood dust pellets which are used for heating as an alternative to gas, coal or firewood.
Together with her husband and two children, she moved from a conflict-affected town of Toretsk, eastern Ukraine, to a big eastern Ukrainian city of Kharkiv. “Our younger was born in March 2014. It was still quiet when I was going to Donetsk maternity hospital, but when we came back, we were already under fire. We survived three shellings, and the third one was the worst, people were killed right around us,” Oksana recalls. “We grabbed the children, the documents, and fled.”
In Toretsk, the family ran a small windows manufacturing company. But at the new place they were not able to set up previous business: all the equipment left in Toretsk and competition in windows production was much higher in Kharkiv. They decided to enter a completely new business sphere – wood dust pellets production. Oksana applied for the livelihood project, ran by IOM with funding from the Government of Germany acting through KfW Development Bank, and received a pellet cooler, which significantly increased production capacity and provided for fire safety. Oksana’s company has established partnership with woodworking companies supplying raw materials, found its loyal customers and already hired one employee. The business is expanding step by step. Oksana says that there are even first interested customers from the European Union.
© Photo IOM / Volodymyr Shuvayev