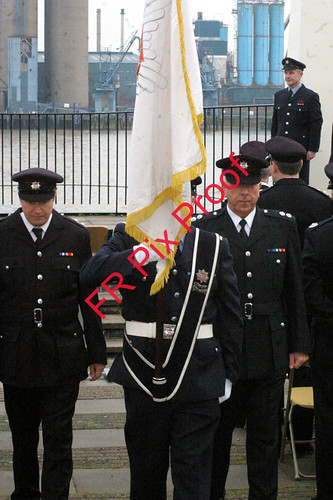 The Compass Point development around Saunders Ness Road and taking in Mariners Mews and Sextant Avenue was built in the mid-80s forming a quiet, neat upmarket estate on the Isle of Dogs.

As part of the development, two tall blocks of flats are abutted by full height cylindrical towers, framing and echoing the view of silos across the Thames and acting as a small reminder of the estate’s industrial past.

Architect Sir Jeremy Dixon’s Georgian-inspired designs were built on Dudgeon’s Wharf, reclaimed after the closure of the docks.

At the end of Sextant Avenue, a memorial remembers the old Wharf – not for its years of hard labour in the service of heavy industry – but for a reason more poignant and tragic.

Forty years ago the world was looking skywards for news of Nasa’s audicious mission to take Buzz Aldrin, Neil Armstrong and Mike Collins to the moon.

On July 17, a day after Apollo 11 shot into the skies atop a cone of fire, another explosion took the lives of five fireman, the biggest loss of life suffered by the London Fire Brigade in peace time.

Dudgeon’s was a ship building firm in the 1800s and was one of a cluster that prospered on the island – including names such as Ash, Stewart’s and Samuda’s. At its height, in the early 1860s, it is estimated that the firms on the Isle of Dogs employed up to 15,000 men and boys in the shipyards and engineering firms.

The most iconic of the ships built at these docks was Isambard Kingdom Brunel’s SS Great Eastern, the largest ship ever built at the time of her launch in 1858.

But the Great Eastern was a last hurrah for ship building on the Thames. The rivers of the North were more efficient and labour and materials were cheaper and in double-quick time large firms of the Thames went bankrupt and tens of thousands were out of a job.

Industry survived one way and another for another 100 years of so until the docks and their associated works began disappearing in the 1960s.

The arrival of containers – which London couldn’t handle – in the late 60s finally rendered the docklands obsolete.

By the time of the 1969 tragedy, the wharf was a redundant "tank farm" with an array of a hundred or so containers for storing oils and spirit, some up to 200,000 gallons in size. However, these tanks were destined to go as part of the regeneration of the land and demolition contractors had received advice on how to take apart these structures safely.

The demolition was rife with danger and difficulties and firefighters had frequently attended the site after sparks from cutting gear ignited small fires.

Less than two weeks before the fatal explosion, 40 men with eight pumps had tackled a fire on waste oil in a derelict tank and now another call arrived at Millwall Fire Station at 11.21am alerting the emergency services to another fire.

Two appliances were sent from Millwall in F Division and another from Brunswick Road. A foam tender from East Ham was sent later along with a fireboat from Greenwich.

Station Officer Innard, believing the fire to be out when he arrived, decided to put a curtain of water into the open top manhole of Tank 97.

Four other officers joined him on top of the tank to feed in the water. Later reports concluded that this pull of water drew air into the tank, mixing with the flammable vapours.

SO Innard then decided to ensure there was no further fire by opening the bottom manhole. Unable to find a spanner to undo the nuts, it was suggested they should be burned off.

As soon as a workman applied the cutting flame of his torch to the first nut, the vapours inside the tank ignited immediately, blowing the roof off the tank, together with the five firefighters and a work man.

The explosion happened at 11.52. Three appliances were sent from Bethnal Green and Bow. Their role was to collect the bodies.

Remembering the tragedy on a brigade forum, one ex-firefighter wrote: "I had been in the job for seven years when this happened and it really shook us. As you say ‘Never forgotten’ especially from us guys who could have been involved. Rest easy, mates."