cherub leaning on a gap-toothed skull 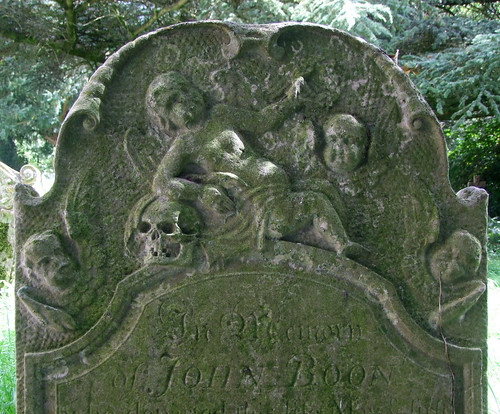 Simon Jenkins has observed that the churches of the Ouse delta form probably the finest concentration of late-medieval craftsmanship in England. Obviously, any cathedral would give them a run for their money, but you know what he means. Here, there are at least a dozen otherwise anonymous and workaday villages with simply enormous churches, many of them replete with wonders in stone and wood. There is remarkably little medieval glass, and hardly a wall-painting at all; perhaps the natural puritanism of the Fen people dispatched these, but saw a practical use to the benches and the fonts. The biggest and grandest churches are at Walpole St Peter and Terrington St Clement, but neither are particularly full of treasures. St Peter is one of the most stunning architectural documents of the late medieval period, and St Clement is full of light and life; but here at Wiggenhall St Mary is the best collection of 15th and 16th century benches in Norfolk, perhaps in England.

There are four Wiggenhalls: St Peter, St Germans, St Mary and St Mary Magdalene, now known simply as Magdalen. All of the villages are small, Magdalen being the biggest, and are mostly approached up narrow straight roads in the fens. All four churches sit close to the banks of the Ouse – these banks have been raised, because the water level is now higher than the surrounding land, but the towers still form startling landmarks for any boat heading upstream from Lynn. St Peter is a ruin, and St Mary is now in the care of the Churches Conservation Trust. It sits to the north of Magdalen with a couple of large houses for company.

As with all CCT churches, St Mary is well-kept. The rendering of the nave and chancel has recently been renewed and painted. They hide a secret of this church, the amount of brick used in its construction. The only expanse of brick still visible is the upper part of the tower. The squatness of the tower belies its height, and stair turrets lean deliciously into it in the north-west and south-west corners, coming out as castellated turrets at the top.

So, we may assume that the top third of the tower is contemporary with the late medieval rebuilding – but the builders kept the Early English doorway on both sides of the church. The south porch is large, but functional; there is nothing of the elaborate decoration you find at Walpole St Peter. Also functional is the extensive late Victorian restoration by George Street – all the roofs are his.

You step inside to an interior that is at once large but a little claustrophobic. This is because of the sheer volume of woodwork – range after range of solid, long, benches with high bench ends. Street’s crown-posted roof seems to press down to meet them; without their pierced and traceried backs they would feel oppressive. The dust in the air and the murky light from the east window gives a sense, just for a moment, of being underwater. There is a stillness, as if we have disturbed something that had long remained undisturbed, as if we were the first people to enter here for ages.

The nave was filled with benches in two phases; firstly in the mid-15th century, and then again in the early 16th century. The newer benches are those in the aisles. Benches are a symptom of what I have come to think of as a proto-Reformation; perhaps a century before the real one, there is a major shift in the English Church from private devotions to corporate acts of worship. This seems to have been partly a response to the Black Death, and a concentration of the mind on making it through purgatory; the breaking up of the old estates brought forth a new wealthy middle class, who were most concerned that their souls should be prayed for. Part of their project was a reinforcing of orthodox Catholic doctrine; during the 15th century, vast perpendicular windows replaced the wall paintings, filling the churches with light, and the great roods were raised up to focus people’s minds on the central doctrine of the Christian faith. Elements of Catholic doctrine – the sacraments, the works of mercy, the deadly sins – appeared in glass and stone. Benches filled the rebuilt churches – no longer were there shadowy corners where old ladies could tell their beads, and the plowman his Paternoster, as Mass progressed. The first pulpits appeared, and with the coming of the pulpit the Priest left his chancel and entered the domain of the people, taking it over. All eyes were fixed on him now.

The bench ends at Wiggenhall St Mary are complex. Tiers arise each side flanking a large niche, which contains a figure. The tiers each rise to a second and third figure, which are sometimes related. Above all rises the solid poppyhead. You can spend an enjoyable half hour just pottering about trying to identify them. Many are in Tudor dress, and are seated in everyday attitudes. Some carry rosaries. Some are Saints, others represent animals, Labours of the Months, virtues or Christian symbols.

Somewhat in contrast, there is an elegant Laudian font cover with slim pillars, and the date 1624. I wondered if the pelican in her piety on top was a later addition. As at several local churches, there is an early-16th century latten lectern, an eagle supported at the feet by three little grinning lions. The Jacobean pulpit still retains its hourglass stand. Smatterings of medieval glass are in the upper lights of the north aisle windows. The royal arms are dated 1791, and tell us that the churchwarden that year was J SUTTRBY.

There is an elegant parclose screen in the south aisle which now contains the elaborate memorial tomb of Sir Henry Kerville and his wife. They lie side by side, hands in pious attitudes of prayer.He died in 1624; most moving are the two little figures below them, one in swaddling clothes; these are their children who died before them.

The east end of the nave was designed for height, for the great rood to draw everyone’s attention. Perhaps to help accentuate this, the chancel arch is curiously narrow, and there are just eight panels on the dado of the screen, four figures on each side flanking the entrance. From the north they are: St Mary of Magdala, St Dorothy, St Margaret, St Scholastica (twin sister of St Benedict), St Catherine, St Barbara, the Blessed Virgin and child, and St John the Baptist. The chancel is relatively simple and empty, left in its 19th century clothes. The grimy green glass of the east window is overpowering. For a moment, you might be anywhere. And then you turn back and see those vast ranges of medieval benches again; they really are most remarkable.

A hallmark of Churches Conservation Trust churches is that they are cleared of clutter; but that is impossible here, of course, because the clutter is the thing you come to see. They are intriguing, fascinating; but this church is curiously lacking in atmosphere, especially if you have just come from Wiggenhall St Germans or Walpole St Peter. It is lifeless; you could be in no doubt that it is redundant, and now little more than a museum.