Door to the Circumcision Room 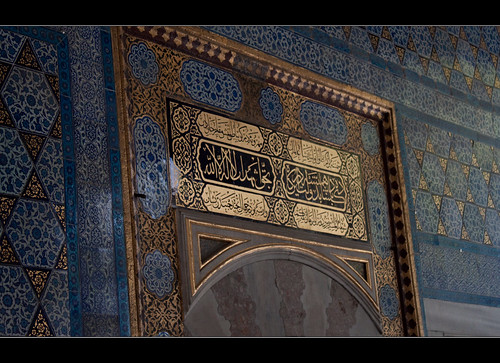 In 1640 Sultan Ibrahim I added the Circumcision Room (Sünnet Odası), a summer kiosk (Yazlik Oda) dedicated to the circumcision of young princes, which is a primary rite of passage in Islam. Its interior and exterior are decorated with a mixed collection of rare recycled tiles such as the blue tiles with flower motifs at the exterior. The most important of these are the blue and white tile panels influenced by far-eastern ceramics on the chamber facade, dated 1529. These once embellished ceremonial buildings of Sultan Suleiman I, such as the building of the Council Hall and the Inner Treasury (both in the Second Courtyard) and the Throne Room (in the Third Courtyard). They were moved here out of nostalgia and reverence for the golden age of his reign. These tiles then served as prototypes for the decoration of the Yerevan and Baghdad kiosks. The room itself is symmetrically proportioned and relatively spacious for the palace, with windows, each with a small fountain. The windows above contain some stained-glass panels. On the right side of the entrance stands a fireplace with a gilded hood. Sultan Ibrahim also built the arcaded roof around the Chamber of the Holy Mantle and the upper terrace between this room and the Baghdad kiosk.
The royal architect Hasan Ağa under Sultan Murat IV constructed during 1635-1636 the Yerevan Kiosk (Revan Köşkü) and in 1638-1639 the Baghdad Kiosk (Bağdat Köşkü) to celebrate the Ottoman victories at Yerevan and Baghdad. Both contain most of their original decoration, with projecting eaves, a central dome and interior with recessed cupboards and woodwork with inlaid nacre tesserae. Both are based on the classical four-iwan plan with sofas filling the rectangular bays.