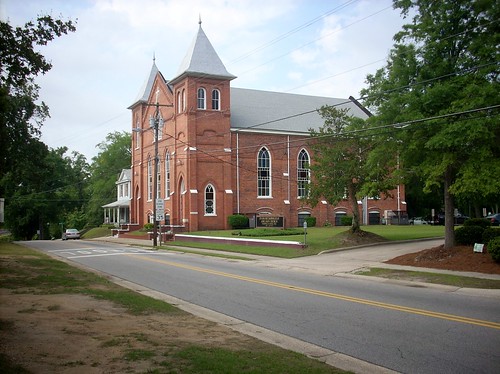 The history of Evans Metropolitan African Methodist Episcopal Zion Church parallels the history of the beginning of the development of our great nation. It was founded in circa (1796) by Henry Evans, a black freedom ordained preacher and a shoemaker from the foothills of Stokes County Virginia, who after overcoming difficulties was in later life loved and revered.

His body lies entombed beneath the chancel of the church built on the original site in 1893. Although the name of the church has changed over the years from the original "African Meeting House", in which both blacks and whites worshipped together, to Evans Chapel and finally to Evans Metropolitan African Methodist Episcopal Zion Church, its mission remains the same: "To be a Beacon Landmark that provides a place to worship, a haven and an inspiration to all who come within the influence of its Christian Services."

The Church Edifice is a beautiful example of Gothic Architecture. The woodwork of the interior is of a notably warm finish. Particular points of significance the beamed, are sixteen panel v-joint ceiling and wainscoting, a balcony with turned posts and brackets, all of which illustrate the superb craftsmanship of the artisians who erected the church, two of whom were James Williams and Joseph Stewart.

The lovely chandeliers and wall brackets originally lighted by gas are now lighted electrically, the exterior of the structure is equally captivating. The front of the building is characterized by a two gable front, two contrasting towers, a lancer or pointed windows and at the pinnacle of the center of the gable, a projected leaning Holy Cross said to be indicative of Henry Evans’ struggle to establish a church.

Because of Evans Metropolitan’s cultural contributions to the community, state, and the nation, and because of its historical and architectural significance, it is honored by our nation having been listed as a National Historic Site (July 7, 1983).