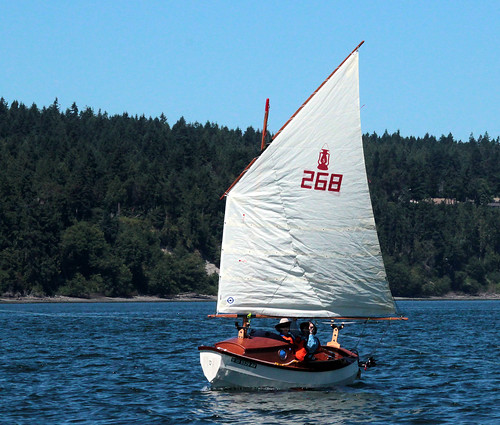 The Palooza Crooza is an outgrowth of the Pocket Yacht Palooza. It begins the day after the one-day Pocket Yacht Palooza, which is usually the third Saturday in July at the Northwest Maritime Center in Port Townsend WA, and can be best characterized, I think, as a small craft group sailing expedition that some might call a "slow-motion raid". It is most emphatically not a race, but an amble in boats of all types. For more information, contact organizer Marty Loken at norseboater22 at gmail.com

The 2015 Palooza Crooza began in Port Townsend on Sunday, July 19th, 2015, a brilliantly sunny day, with about ten knots of wind. I counted 22 boats, including a single and two double kayaks. One utility tug (the 26-foot BLUE STAR) and one power catamaran (JUST ENUF, a Bernd Kohler design) accompanied the fleet.

The track the first day took us south across Port Townsend Bay, through the Port Townsend Canal between the Olympic Peninsula and Indian Island, then south across Oak Bay, passing Olele Point, and into Mats Mats Bay for the night. With temperatures reaching almost 90 degrees under perfectly clear skies, the winds died in lower Port Townsend Bay and the fleet ended up rowing and using the iron wind (engines) to make it to Mats Mats.

The track the second day took the fleet from Mats Mats Bay to Fort Flagler State Park, east of Marrowstone Island along the main shipping channel in the Puget Sound. The weather started out dark and cloudy, with temperatures in the low 60’s and 10-15 knot winds out of the south, backing into the south-southeast and then east-northeast as the fleet made its way north in confused 2-3 foot lumpy seas on a favorable ebb tide. Once past Marrowstone Point, with its distinctive lighthouse, the fleet enjoyed a downwind run along the north-facing cliffs and made it past Ratt Island and into Kilisut Harbor between Marrowstone and Indian Island in the late morning. The last vessel arrived just after 1pm. By that time, the skies had cleared and a beautiful though much cooler afternoon was enjoyed by all.

The track the fourth and final day took the remaining 2015 Palooza Croosa participants from Kilisut Harbor back to Port Townsend’s Boat Haven and the end of the cruise.

The boat is 11 feet 11 inches long overall, has a beam of 5 feet 4 inches, and a draft of 7 inches with its offset centerboard up. It is ballasted with 173 pounds of water that is drained when the boat is hauled up the launching ramp, and consequently is easily towed behind any small vehicle such as Subaru Outback. smallcraftadvisor.com/scamppagemenu

It is considered a "micro-cruiser", and can sleep one person on a 8 foot 3 inch berth or two people on a 6 foot 6 inch berth. It accomplishes this surprisingly spacious amount of room in such a short length because it is pram-bowed, meaning the vee-bow ends just above the water and flares into a flat transom, which significantly enhances available space. Four adults can easily fit into the cockpit with room to spare.

The boat can be built from plans or from a kit, both available from Small Craft Advisor. It has proven to be a very popular design, and dozens have been built to date.

Building and sailing classes are offered by The Pocket Yacht. You can find out more, here: www.thepocketyacht.com/ and here:hookedonwoodenboats.com/howb-039-howard-rice-cape-horn-ca..