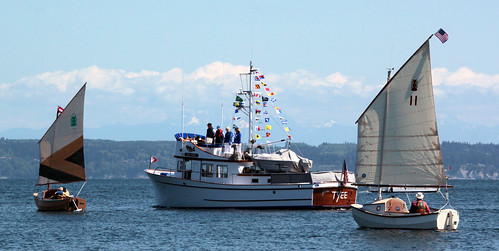 The Port Townsend (Washington) Yacht Club (PTYC) was organized in February, 1947. Friendly and welcoming to all interested parties, the Club has nearly one hundred active members, and hosts a variety of activities and cruises throughout the year. Membership is open to all.
www.ptyc.net

The Club hosts Opening Day ceremonies on the first Saturday in May to celebrate the beginning of the boating and cruising season in our corner of the Pacific Northwest. This year, the ceremony and boat parade was held Saturday, May 2nd, 2015 on the Port Townsend waterfront, Commodore Gerry Walsh officiating. This year, in marked contrast to the previous year, the weather was absolutely spectacular.

Ceremonies begin with an Opening Day breakfast at the Club’s facilities just north of the Port Townsend Boat Haven which was concluded by a flag-raising conducted by the local Sea Scouts and Pledge of Allegiance.

Commodore Gerry Walsh presided over the Opening Day parade. The reviewing stand was at the Northwest Maritime Center pier, which affords a great view of the Port Townsend waterfront. Gerry’s newly christened boat, CELTIC SUN, was moored at the foot of the pier.

The Opening Day Parade began with a small craft parade coordinated by the Port Townsend Pocket Yachters swinging past the reviewing stand and marshalling close inshore to make room the larger vessels. groups.yahoo.com/group/porttownsendsmallboats/

Port Townsend Yacht Club members followed up with the wide variety of vessels both sail and power owned by members of the Club.

The Club was honored by a VHF radio address from the mayor of Port Townsend, and the ceremonies and parade were closed with the traditional "Blessing of the Fleet" for all. Afterwards, members and guests enjoyed the sunshine and incredible weather with sails and cruising around the area and a chowder supper at the end of the day.