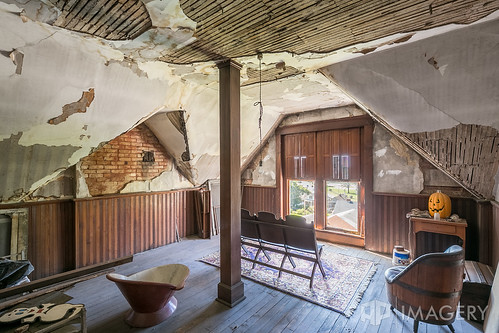 Description: Resting on the top of a hill overlooking the Ohio River, the two-story, brick Queen Anne has front and side gables. The slightly projecting front gable contains arched windows on the first and second floors. Sandstone beltcourses unite the window arches of the gable windows. Stone is also used for watercourse at the basement level and for the lintels for the basement windows. Balancing the front tower is a one-story front porch supported by slender double columns and surrounded by a spindled balustrade. The details of the front gable are repeated in the gable on the east of the house. Arched windows in the peak of the gable provide light for the attic level. The west gable of the house is unusual in that the gable peak is made up of window spaces and the top of the chimney. Also providing
light for the attic space is a hexagonal dormer window at the front. The rear of the house has a two-story wing with rectangular windows. The outer walls are 17" thick. There are four full floors of the house with the lowest level being partially underground but having the same floorplan as the other three stories. All levels have 13 foot ceilings. Interiors retain original inside shutters, cherry woodwork, all mantels, and stained-glass windows in original state. The front stairway provides access to the second floor while the back stairway provides access to the second floor while the back stairway provides access to
all four levels.

Significance: The Monarch-Payne House is nominated under Criteria A and C. P. E. Payne, the builder, was significant in the development and expansion of the Owensboro distilling industry. His house is also significant as an outstanding example of the Queen Anne style
of architecture in Owensboro. P. E. Payne married into the Monarch family and became a partner in the Sour Mash Distilling Company which was controlled by the Monarch family.
His house was one of four built at the same time on Distiller’s Row by Monarch family members. Only two of the these houses remain, the Monarch-Payne House and the LeVega Clements House. The Monarch-Payne House was built in 1890 by P. E. Payne, a relative by marriage and partner of M. V. Monarch in his Sour Mash Distilling Company. In 1925 the Morris family purchased the home and didn’t sell it until 2005. The current owners bought it in 2006. While it is known as the Monarch-Payne House, it was never occupied by the Monarch family the only house on Distiller’s Row which wasn’t. The streets behind the homes are named Payne and Monarch. The long drive to the mansion is now lined with small houses, a necessity brought by the decline of the Payne’s fortune due to prohibition.

The home is currently for sale.