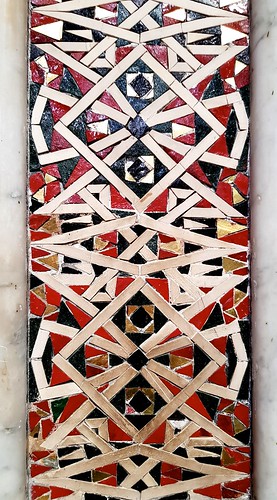 Norman-Byzantine cathedral part of a group of nine inscribed as Arab-Norman Palermo and the Cathedral Churches of Cefalù and Monreale.

After the Norman conquest in 1072, Christians took back the former Palermo cathedral. Probably the village’s role as temporary ecclesiastical centre played a part in King William II’s decision to build a cathedral here.

Monreale was long a small village. When the Norman Kings of Sicily chose the area as their hunting resort, more people and commerce came to the area as they built a palace (probably identifiable with the modern town hall).

The outsides of the principal doorways and their pointed arches are magnificently enriched with carving and coloured inlay, a curious combination of three styles – Norman-French, Byzantine and Arab.

The cathedral interior contains the largest cycle of Byzantine mosaics extant in Italy and one of the greatest extant examples of Norman architecture anywhere.

Begun in 1174 by William II. In 1182 the church, dedicated to the Nativity of the Virgin Mary, was, by a bull of Pope Lucius III, elevated to the rank of a metropolitan cathedral.

The archiepiscopal palace and monastic buildings on the south side were of great size and magnificence, and were surrounded by a massive precinct wall, crowned at intervals by twelve towers. This has been mostly rebuilt, and but little now remains except ruins of some of the towers, a great part of the monks’ dormitory and frater, and the splendid cloister, completed about 1200.

The latter is well preserved, and is one of the finest Italian cloisters now extant both for size and beauty of detail. It is about 2,200 m2, with pointed arches decorated with diaper work, supported on pairs of columns in white marble, 216 in all, which were alternately plain and decorated by bands of patterns in gold and colors, made of glass tesserae, arranged either spirally or vertically from end to end of each shaft. The marble capitals are each carved with foliage, biblical scenes and allegories, no two being alike. At one angle, a square pillared projection contains the marble fountain or monks’ lavatorium, evidently the work of Muslim sculptors.

The church’s plan is a mixture of Eastern Rite and Roman Catholic arrangement. The nave is like an Italian basilica, while the large triple-apsed choir is similar to one of the early three-apsed churches, of which so many examples still exist in Syria and elsewhere in the Middle East. It is like two quite different churches put together endwise.

The basilican nave is wide, with narrow aisles. On each side, monolithic columns of grey oriental granite (except one, which is of cipolin marble) support eight pointed arches much stilted. The capitals of these (mainly Corinthian) are also of the classical period. There is no triforium, but a high clerestory with wide two-light windows, with simple tracery like those in the nave-aisles and throughout the church, which give sufficient light.

The other half, eastern in two senses, is both wider and higher than the nave. It also is divided into a central space with two aisles, each of the divisions ending at the east with an apse. The roofs throughout are of open woodwork very low in pitch, constructionally plain, but richly decorated with colour, now mostly restored. At the west end of the nave are two projecting towers, with a narthex (entrance) between them. A large open atrium, which once existed at the west, is now completely destroyed, having been replaced by a Renaissance portico by Giovanni Domenico and Fazio Gagini (1547–1569).

It is, however, the large extent (6,500 m2) of the impressive glass mosaics covering the interior which make this church so splendid. With the exception of a high dado, made of marble slabs with bands of mosaic between them, the whole interior surface of the walls, including soffits and jambs of all the arches, is covered with minute mosaic-pictures in bright colors on a gold ground. The mosaic pictures are arranged in tiers, divided by horizontal and vertical bands. In parts of the choir there are five of these tiers of subjects or single figures one above another.

The half dome of the central apse has a colossal half-length figure of Christ, with a seated Virgin and Child below; the other apses have full-length figures of St Peter and St Paul. Inscriptions on each picture explain the subject or saint represented; these are in Latin, except some few which are in Greek. The subjects in the nave begin with scenes from the Book of Genesis, illustrating the Old Testament types of Christ and His scheme of redemption, with figures of those who prophesied and prepared for His coming. Around the lower tier and the choir are subjects from the New Testament, chiefly representing Christ’s miracles and suffering, with apostles, evangelists and other saints. The design, execution and choice of subjects all appear to be of Byzantine origin, the subjects being selected from the Menologion of Basil II drawn up by the emperor Basil II in the 10th century.