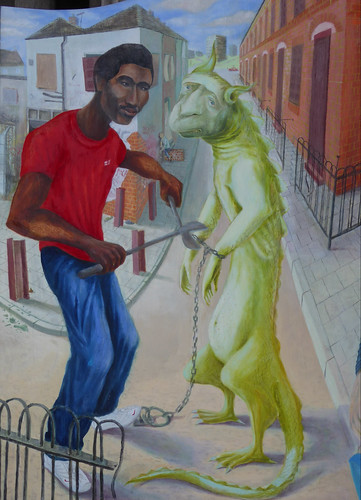 Altarpiece in the Fraser Chapel by Mark Cazalet, using a contemporary setting to evoke the theme of the Trinity as a modern family in the central group, whilst the figures on either side represent St George (releasing the dragon as an embodiment of man’s creative energies rather than slaying it) and St Denys holding his head amongst modern-day shoppers).

Manchester Cathedral still looks to all intents and purposes like an especially grand town parish church, exuding civic pride. This is historically speaking the truth, for the diocese of Manchester was only created in 1847 and before being raised to cathedral rank this was the parish and collegiate church of St Mary, St Denys and St George. It is nonetheless an imposing edifice, with reputedly the widest nave of any medieval church in England, owing to the former presence of a multitude of chantry chapels whose internal subdivisions have long since disappeared.

Though a parish church had existed here previously the bulk of the present building is the result of rebuilding in the 15th century when it was promoted to collegiate status. Stylistically the church is uniformly late Perpendicular, and though the upper half of the west tower is a Victorian addition it blends well with the remainder of the cathedral. Unfortunately the original sandstone did not age well, necessitating not only the complete renewal of the external stonework but also much of the internal surface too (which was in poor condition following an ill advised attempt to lighten the interior by applying ‘roman cement’ and hacking into the stonework to key the new layer, an unrestored section of original stonework at the west end of the nave illustrates the state it was reduced to). The work inside and out respected the original design faithfully, though the cathedral has lost most of its patina of age in the process, and thus despite being a medieval building it now appears as if it is a Victorian one.

Further restoration was necessary following bomb damage in World War II when a high-explosive demolished the lady chapel and much of the north east corner. The rebuilding didn’t entirely follow the original form, a new (largely windowless) design was used for the lady chapel, the new north east window was reduced in size and a small chantry that formerly projected from the north wall was not rebuilt.

Another consequence of the bombing was the loss of all the pre-war stained glass. This was almost entirely Victorian and had made the interior rather gloomy so its loss is generally not mourned. Today the cathedral is adorned instead by some very vibrant examples of contemporary stained glass, most notably the sequence of five windows at the west end by Anthony Holloway providing bold splashes of colour in their abstract expressionism.

Despite all the restoration and renewal the cathedral still has much to offer, and whilst the stonework was largely replace there is much medieval woodwork remaining in the roofs and furnishings. The outstanding feature here are the early 16th century choir stalls, some of the very finest in the country with enjoyable misericord seats set beneath wonderfully rich canopies, some of the best late medieval wood carving to have survived.

Manchester is one of the most successful of the ‘parish church cathedral’ upgrades where new dioceses were formed, and whilst its form still betrays its origins as a collegiate church it possesses the scale, interest and dignity of a cathedral.

The cathedral is normally open to visitors daily.
en.wikipedia.org/wiki/Manchester_Cathedral