The Long Gallery at Hanbury Hall from The Sunken Parterre 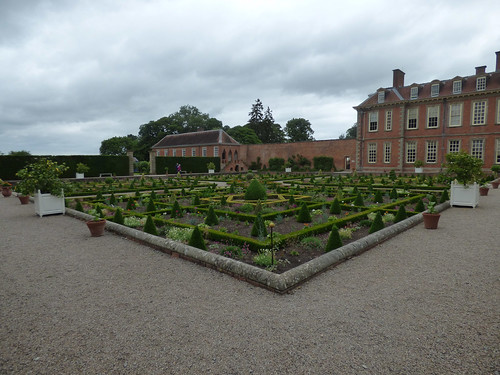 A visit to Hanbury Hall, near the village of Hanbury in Worcestershire. A National Trust property since 1953.

Hanbury Hall is a large stately home, built in the early 18th century, standing in parkland at Hanbury, Worcestershire.

The main range has two storeys and is built of red brick in the Queen Anne style. It is a Grade I listed building. The associated Orangery and Long Gallery pavilion ranges are listed Grade II*.

Hanbury Hall was built by the wealthy chancery lawyer Thomas Vernon in the early 18th century. Thomas Vernon was the great-grandson of the first Vernon to come to Hanbury, Worcestershire, Rev Richard Vernon (1549–1628). Rev Richard and his descendants slowly accumulated land in Hanbury, including the manor, bought by Edward Vernon in 1630, but it was Thomas, through his successful legal practice, who added most to estates, which amounted to nearly 8,000 acres (3,200 ha) in his successor Bowater Vernon’s day.

Hanbury Hall is thought to stand on the site of the previous mansion, Spernall Hall, and Thomas Vernon first describes himself as ‘of Hanbury Hall’ in 1706, and this and other evidence leads to a likely completion date of about 1706. The date of 1701 above the front door is thought to be a Victorian embellishment, but no building accounts are known to exist.

Although Hanbury Hall appears to be of a very uniform style, the rear wall is clearly of a different and rather earlier style, and may mark the first phase of a building campaign when Thomas Vernon and his wife Mary first came into possession of Spernall Hall in 1692 when his bachelor uncle John Vernon died.

A notable feature of Hanbury Hall is the painting of the staircase, hall ceiling, and other rooms by the English painter Sir James Thornhill. They include a small representation of Rev Henry Sacheverell being cast to the furies – this relates to an incident in 1710 when Sacheverell, a Tory, was put on trial for sedition by the Whig government, and dates the paintings to that year. The focus of the paintings around the stairwell is the life of the Greek hero Achilles, as told by a range of classical sources. They are surmounted by a large representation of the Olympian gods on the ceiling.

The original plan of the Hall had a large undivided central hall with the main staircase leading off it, with many rather small rooms in the corner pavilions and north range – the south range was given over mainly to service rooms. The 18th century Worcestershire historian Treadway Nash, in his Collections for the History of Worcestershire, wrote “Here is a large handsome house built by Counsellor Vernon about the year 1710 when a bad style of architecture prevailed; many windows and doors, rooms small, many closets, few arched cellars, large stables and offices in full view, are marks of that time”.

When the heiress Emma Vernon (1754–1818) married Henry Cecil, 1st Marquess of Exeter in 1776, Cecil clearly was of the same opinion, as he remodelled the interior (other than the great hall) creating larger rooms and enlarging the north east pavilion. On the south façade, having removed a doorway he repositioned all the windows to lie under their first floor equivalent. On the south side there had been large formal gardens, clearly shown in Dougharty’s perspective drawing contained in the estate maps of the 1730s, and Cecil swept all these away (including the farm buildings in front of the Hall) and landscaped the park in the fashion of the time – he would have had contact with Capability Brown when being brought up by his uncle 9th Earl of Exeter at Burghley House.

Following Henry and Emma’s divorce in 1791 the contents were all sold, and the house remained empty until Henry’s death in 1804, when Emma and her third husband, John Phillips, were able to regain possession. As the house had lain unoccupied for so long, many repairs had to be carried out at that time. Emma died in 1818 and left her second cousin, Thomas Shrawley Vernon (1759-1825), as the heir to her estate after the death of her husband John Phillips. Phillips married again and had two daughters in Hanbury before finally moving out in 1829. From then, the eldest son of Emma’s heir, Thomas Tayler Vernon (1792–1835), was able to occupy it. His grandson Harry Foley Vernon (1834–1920) MP, was created 1st Baronet of Hanbury in 1885, and was succeeded by his son Sir (Bowater) George Hamilton Vernon (1865–1940), 2nd Baronet. Sir George led an unhappy life, separating from his wife Doris, and spending his last 10 years living with his secretary and companion Ruth Horton, who later changed her name by deed poll to Vernon. During this time the agricultural depression led to a reduction in rental income, and Hanbury Hall suffered a lack of care.

In poor health, Sir George Vernon took his own life in 1940. There were no further heirs to the Baronetcy which became extinct. Sir George’s estranged wife was able to move back in after his death, dying there in 1962. In the meantime, negotiations had led to the National Trust having the reversion, and after making essential repairs on Lady Vernon’s death, the hall was let to tenants and opened to the public on a restricted basis. In recent years the hall has been managed more commercially and is now open daily.

The Long Gallery & Dairy. There is a small art gallery inside of here. I was more interested in the furniture (or lack of it) in the rooms, than the art on the walls!

The Long Gallery and attached wall. c1701 with mid-C19 alterations. Red
brick in Flemish bond; hipped plain tiled roof. L-plan; main part of seven
bays aligned north-west/south-east with single-bay north-east return; external
chimney with off-sets at rear and in angle of return. Single storey and base-
ment with 2-course band between levels; modillion eaves cornice to front, brick
dentilled eaves cornice at rear. Queen Anne style. Main south-east elevation:
seven sash windows, all 18-pane with thick glazing bars, moulded architraves
and gauged flat heads; basement has six irregularly-spaced casements and a half-
glazed door with a cambered head; entrance at south-east end has three C19
pointed brick arches, the outer two having pierced brick infill in lower part
with a sandstone coping; two flights of steps lead up to the central entrance
arch and porch within which are fitted side benches. Interior: panelled to
shoulder height; two Jacobean overmantels in main part; one is constructed from
church woodwork, carved with the symbols of the Passion and frames a funerary
hatchment with the three Vernon wheatsheaves; the other is divided into three
compartments by Caryatids and is crowned by a frieze of fruit, flowers and strap-
work; at the centre are carved the Prince of Wales’ feathers and, beneath the
figures, a fleur-de-lis, rose, thistle and pear; it was moved to the Long
Gallery from the Parlour and is believed to have originally come from Tickenhill
House, Bewdley. The Study in the north-east return is also panelled. A dairy
in the basement has walls covered with glazed ceramic tiles. The attached wall
links the Long Gallery to the south-west of the house; brick with sandstone
coping; about 30 yards long and 20 feet high; south-west side has blocked open-
ings with cambered heads; north-east side has four recessed rectangular panels.
At the south-east end is a half-glazed door with a cambered head.
(VCH 3 (ii) p 373; BoE, p 186; Hanbury Hall, The National Trust Official Guide-
book, 1981, p 26; Country Life xxxix, p 502; LXLiii, p 18, 16; Gardens X p 368).

This text is from the original listing, and may not necessarily reflect the current setting of the building.

The Long Gallery and Hanbury Hall seen from the The Sunken Parterre. The main part of The Great Garden.

Hanbury Hall is A Grade I Listed Building.

Country house in landscaped park. Dated 1701 with early and mid-C19 alterations.
Built by William Rudhall for Thomas Vernon. Red brick in Flemish bond with
ashlar dressings; plain tiled hipped roof with broad eaves and large brick stacks.
Central block with wings to front and rear returning to project on side elevations
as independent pavilions. Two storeys and attic with dormers and central cupola;
moulded plinth, band between storeys and wood modillion eaves cornice; Queen
Anne style. South-east entrance elevation: 3:1:3:1:3 bays; outer three bays
wings; central three bays break forward, are pedimented and are flanked by
engaged Corinthian columns on high pedestals. Windows are mainly 18-pane sashes,
most retaining their thick glazing bars, and have moulded architraves, sills
and keyblocks; central first-floor window has an elaborately carved surround
with large scrolls and an apron carved with the Vernon coat of arms flanked by
the date "1701". The dormers are pedimented, the pediments of the central five
bays being alternately segmental, and have 12-pane sash windows; contained within
the central entrance pediment is an oeil-de-boeuf window. The entrance porch
with its two Corinthian columns and entablature is an early C19 addition; the
front and sides have glazed infill and, within, are the half-glazed double
entrance doors. The central octagonal timber cupola was rebuilt in 1809 and
has glazed semi-circular headed sides, a clockface to front and rear, a moulded
cornice and an ogee dome with ball finial and weathervane. The south-west side
elevation is articulated by a regular 2:7:2 arrangement; the north-east side
elevation is of 3:4:2 composition, the left bay of the recessed centre having
a blocked doorway with pedimented surround. The rear elevation has two small
square mid-C19 additions in the angles with the wings. The lead rainwater
goods throughout are decorated with lions’ heads and rosettes. Interior:
Hall occupies five central front bays and is panelled and has painted ceiling
with trompe l’oeil saucer domes; wall facing the entrance has an original
bolection-moulded chimney-piece above which is niche containing white marble
bust of Thomas Vernon, possibly by Francis Bird; against right wall are set
three Corinthian half-columns and to left side of hall is the staircase.
Staircase: large open-well type with turned and fluted balusters, some
original parquet on landings; former dado removed to make way for wall paint-
ings by Sir James Thornhill, c1710. These are set within architectural
surrounds and depict scenes from the Life of Achilles; the ceiling above shows
an assembly of the classical deities. There are also two panels by Thornhill
on the ceiling of the Long Room of Apollo and Leukothea and the Rape of
Orithyia; in the same room is an ornate Rococo chimney-piece of c1750. During
the late C18 Emma Vernon undertook some internal alterations including the
redecoration of the Library and Drawing Room in the front wings in a Neo-
Classical style. In the Parlour to the rear of the Hall is further panelling
and another bolection-moulded chimney-piece. Upstairs a similar chimney-
piece survives in a complete three-room apartment (known as the Hercules apart-
ment), to the rear of the south-west wing which is panelled throughout, and
has an additional small corner fireplace with pilastered surround and ogee
canopy.
The actual authorship of Hanbury Hall is uncertain. It incorporates elements
of William Talman’s designs, notably the centre-piece of Thoresby, Nottingham-
shire of the 1680’s, the garden front at Swallowfed Park, Berkshire of 1689-91
and the interior layout of Fetcham Park, Surrey of 1705. It also bears strong
similarities to the nearby Ragley Hall, Warwickshire of 1679-83 by Robert Hooke
with its old-fashioned hipped roof, central pediment and "pavilion" wings. The
surviving drawing by the builder William Rudhall is not unlike Thoresby and, as
it is quite possible Rudhall may have worked at Ragley, the consequent design
of Hanbury could be his amalgamation of these two influences. Hanbury Hall was
the seat of the Vernon family until 1953 when it was given to the National Trust.
(Country Life, xxxix, p 502; CXLiii, p 18 and 66; Gardens X, – 368; VCH 3 (ii),
p 372-3; BoE, p 184-6; Hanbury Hall, The National Trust Guide, 1981).

This text is from the original listing, and may not necessarily reflect the current setting of the building.

Published in the Birmingham Mail on Friday 24th August 2018.